Create an Account - Increase your productivity, customize your experience, and engage in information you care about.

Wastewater (sewage) from homes and businesses in Morgan Hill flows in private pipes (laterals) to neighborhood collection pipes and is ultimately carried in a large trunk line down to the wastewater treatment facility in Gilroy. While this trunk line is designed to carry all the wastewater generated by homes and businesses, it is not large enough to carry stormwater, too. Unfortunately, as the pipes that make up this wastewater collection system have aged, cracks and breaks in the system have developed. This allows stormwater to enter the wastewater collection system. This stormwater intrusion has resulted in sewage overflows in the trunk line that can pollute local creeks and rivers and could ultimately compromise drinking water quality. This graph depicts the historical connection between rain and sewage flow, which shows an increase of flow as there is an increase in rain. 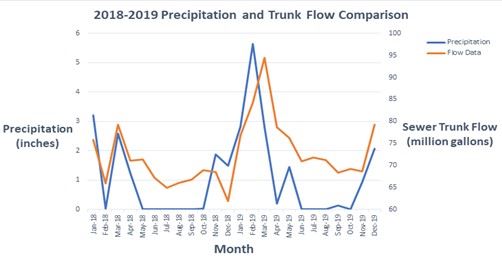 After large storms repeatedly created sanitary sewer overflows in San Martin, the City was sued and entered into a settlement agreement to reduce sewage overflows resulting from these storms. The City is aggressively reducing the inflow and infiltration of stormwater into the sanitary sewer system. For the portions of the system that are owned by the City, nearly $3 million has been spent repairing and replacing public sewer infrastructure.

In addition to these public expenditures, the City’s settlement agreement also obligates the City to take action to reduce stormwater entering the privately-owned portions of the sewer system. These private sewer laterals are subject to the cracking, displacement, and failures that allow stormwater to rush in and overflow the City’s infrastructure during large storm events.

The City has been inspecting, repairing, and maintaining the City owned lines and will continue to do so. A Private Sewer Lateral Ordinance accounts for the remainder of the sewer lines in the overall system that lie on private property. The program takes effect on June 1, 2022, and requires an inspection and related repairs to be completed as part of all real estate transactions for properties built more than fifteen years ago. Private sanitary sewer collection systems are required to be inspected on a more regular basis.